Nigeria Basketball Team (D’Tigers) Skipper to the AfroBasket 2015 Olumide Oyedeji came out during the week with a sad conclusion on his fellow athletes who he describes as lacking in the area of education.

Oyedeji, while speaking Freethrow in a recent interview noted that the biggest challenge facing most Nigerian athletes rests with poor educational backgrounds

The former NBA player while answering questions on his collegiate basketball initiative stated that one of the major reasons behind the project is to help keep Nigerian athletes in school.

“The Olumide Oyedeji Intercollegiate Basketball Championship is geared towards helping the Nigerian athlete to focus on education. I have noticed that about 75% of Nigerian athletes have poor educational backgrounds and it affects them negatively in the way they react to issues. 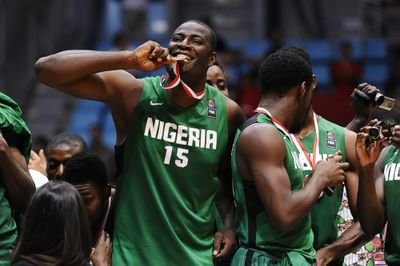 Olumide Oyedeji with the D’Tigers

“Having benefitted from education through basketball, I want to use the intercollegiate basketball championship to attract our athletes back to school. The Nigerian top league is so short that our players don’t have enough games to play but with this now, they have additional games to play to make them better. On the other hand, the players will get an education along the line.

“As a player, injury can end your career just when you think you’re at the peak of your career and that will be the end but with an education, you can get into other spheres of life and continue with another career. Education is one thing that can’t be taken away from you once you’re educated,” he stated.

While not ruling himself out of another season playing the game, Oyedeji says the AfroBasket 2017 in Congo won’t be a bad idea as, Oyedeji looks set to be a part of the squad that would defend the title.

In this interview with fiba.com, Oyedeji speaks of the possibilities of playing on for another season, the situation which surrounded his withdrawal from the Rio 2016 camp, his dream for a sustained collegiate basketball league for Nigeria and the contentious issue of an all foreign based players in D’ Tigers to major championship.

He also played in the Spanish League with Granada. Oyedeji is currently signed on with the London Lions, a team based in London and competes in the British Basketball League – the top level men’s basketball league in the United Kingdom.

He had played with Shanxi Zhongyu in the Chinese Basketball Association. He played with Changwon LG Sakers of the Korean Basketball League in 2011. However, he was released from the team, despite averaging 10.8 points, 15.0 rebounds, and 1.7 blocks per game.

The University of Ife, alumni is the only African Player to ever feature in all major basketball tournaments on the global stage, Olympics Games, World Cup, Commonwealth Games, All Africa Games, NBA, Euro-League, Asia Championships and South America Basketball league as well as being the first African player ever to be drafted outside America to the NBA.

He featured in the invitational tournament in South Africa where he captained the team and lead them to victory in the finals. Nigeria’s basketball team, D’Tigers, emerged overall winners of the 2015 Four Nations’ invitational basketball tournament hosted by South Africa on Sunday, March 22, 2015. Oyedeji, the longest serving captain of the Nigerian Men’s national team emerged the MVP of that tournament.

The International Basketball Federation, FIBA, Central Board appointed the him to the FIBA Player’s commission for the 2014-2019 term of office last year. Oyedeji’s appointment resulted from his nomination by the Nigerian Basketball Federation in line with the criteria provided by the world governing body of basketball on his achievement on the court as well as his tireless work ethic in developing the game not only in his home country but beyond its borders in Africa and across the globe. He is expected to serve in the newly inaugurated FIBA Player’s commission under the chairmanship of former Serbian International and NBA great, Vlade Divac.